In retrospect, today seems totally indescribable.  It wasn’t exactly busy, it wasn’t exactly boring, I cried really hard, I laughed really loud and I ate some good food.  Today just … was, I guess.  As a writer, one of the hazards of the job is that you look for deeper meaning and symbolism in EVERYTHING, absolutely everything.  When the meaning and/or symbolism is not easily found or discerned, I go into panic mode.  I feel restless, unsure about life, and suddenly quite overwhelmed by the enormity of the universe and existence.  I so desperately want for every single, solitary moment of my life to be filled with meaning – with excitement, drama, romance, mystery, intrigue, etc. that when it’s not, I feel empty and wasted.  Sometimes, I worry about whether or not I have bipolar disorder because my changes in mood and manic fits seem to fit the description.  Or is it just that I’m passionate, and should that be viewed as a negative thing?  I believe the stronger one reacts to a situation, the more that person is emotionally invested in the situation and has therefore developed a deep connection.  I want deep connections with others more than anything else, more than stable employment, riches and all material possessions.

Does that make me crazy? 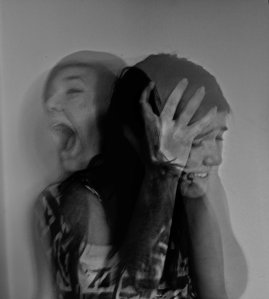 Maybe I just think too much.

PROMPT: “Four college bandmates who haven’t seen each other in years travel back to their former campus for a reunion.”

PIECE: Eric stood outside the ornate-looking double doors that served as the entrance to the so-called “ballroom” on campus.  He was rocking back and forth on his heels, in expensive shoes that pinched his toes and that had been purchased for this very occasion.  He had been so excited to see Tom, Ted and Joe; as he was driving up the coast of the Garden State, he had been reminiscing about old times and glory days.  He remembered the way his thin chest had swelled with pride when the four of them, cleverly named Quatrain of Pain, had played at Homecoming and the student body had embraced them and really liked their sound.  That night, beneath the lights in the Student Center that hung over the stage, Eric believed for the first time that his dream was attainable.  He could be rich and famous and followed by adoring fans.  Hell, after all, he had the girl.  He remembered looking down and into the crowd for that wide smile, and remembered wanting to vomit right then and there in front of everyone when he realized that smile was not meant for him.  In reality, Kelly had been smiling at Tom.  To make matters worse, Tom had been smiling right back; smiling and winking and shamelessly flirting with the one woman Eric had ever really and truly connected with.  The last time Eric and Tom had a conversation had been that night, and it had been brutal, just short of flying fists.  It had been the end of a friendship, the end of the band and the end of a dream.  Eric had watched Tom leave with Kelly, scowling even as he slipped an arm around her tiny waist.  He had been animatedly saying something and when Kelly looked back over her shoulder at Eric, Eric had wanted to die.  Taking a deep breath, Eric returned to the present and eyed the double doors with a real sense of trepidation.

On the other side of the door stood Tom and he was looking out at the crowd.  People with beaming, genuine smiles moved from table to table, mingling and catching up.  Tom shoved his hands in the front pockets of his khakis and remained where he was.  He had wanted to join in the frivolity, but something was holding him back, nastily whispering in his ear that he had no right to show up, not after what he had done to Eric and Ted and Joe.  He had ruined the band, ruined a shared dream and then systematically and swiftly cut them from his life.  When he walked in and had spotted Ted and Joe across the room, serving as the center of attention for a small crowd who were all laughing with their heads thrown back, he had started to walk over, smiling in spite of himself.  He had halted suddenly when he saw Kelly walking over.  The break-up had been apocalyptic; Kelly had undergone a procedure which ended a life Tom had helped her create, but never said anything to Tom about it until it was over.  Tom had shoved her hard, bruised her and said some harsh things he could never take back.  He stayed where he was, lonely and self-pitying.

Ted and Joe had made it out of college unscathed.  Sure, they had been upset when the band disbanded, but they had each other and so they survived.  After college, they had moved in together.  Ted worked at an engineering firm in the city and had just started dating a coworker.  Joe was playing music in local bars with different bands at night after doing custodial work at the local baseball stadium during the day.  He was planning to move out with his longtime girlfriend, but was waiting for the right moment to tell Ted.  For now, they would reminisce and have a good time and save all the complicated, messy bullshit for the morning.