Every time that I have tried to update this blog, I have been thwarted by an unreliable internet connection.  It is incredibly frustrating and I have been tempted to just give up and save the update for tomorrow, but I have already lost far too much time.  There are so many stories that I have neglected that need to be told.  There is no more time to waste.

Sometimes I think about purchasing a pack of cigarettes and lighting up a long, slender, cylindrical stick of tobacco encased in paper.  I would inhale smooth and deep, let the smoke and tar sufficiently coat my lungs, and then I would exhale all the anxiety, insecurity, stress, and worry – all the really ugly and cancerous toxins.  I have romanticized smoking as an inexplicably dangerous, freeing, and alluring activity.  I think there is something about both the blatant idiocy and sheer recklessness that is strangely appealing.  This notion is strange indeed, given the current socioeconomic climate which is exceptionally health-conscious, but I suppose I am strange.  That adjective used to embarrass me, but now I embrace it fully.  In fact, I think that it is wonderfully liberating.
“Where are you now?  Where are you now?  Do you ever think of me in the quiet?  In the crowd?”

It has been quite some time since I have posted a blog entry.  My negligence has not been a result of wanting for inspiration.  Rather, my blog has remained stagnant because of a base, weak aspect of human nature: simple laziness.  I am tired and lacking in motivation to do anything other than sit on my ever-growing ass, let alone create.  Monday through Friday I come home defeated because I am exhausted from work and having a hell of a time adjusting to the shortened schedule because there never seems to be a respite – the immersion in school and grading and paperwork is total and complete because “home” is forcibly transformed into a second office.  The high school instructional schedule runs from 7:00AM to 11:57AM, and then teachers are required to stay until 12:50PM, performing assorted and assigned duties.  We then are required to leave, unable to return to our classrooms and forced to contend with a swamped faculty room and crowded library.  I feel – and I know I am not alone – as if I am constantly moving from space to space without a moment to catch my breath and without a sense of validity or ownership.  It is incredibly draining and defeating.

And for me, when I come “home” in desperate search of sanctuary but am still laden with work and an endless list of obligations, I am still nomadic and without a space to call my own.  I have a bedroom, but it is increasingly cramped for a young woman.  It is literally the smallest room in the house but what is more heartbreaking for me is the lack of metaphorical space and of room to grow.  I am surrounded by reminders of my childhood and adolescence, and of all of the failings, regrets, and shortcomings.  I am faced with physical, tangible mementos and I have to contend with vague memories, cloudy reminisces.  I am engulfed in juvenile dramatics at work and at home, which makes it more difficult to progress and move forward.  I feel stuck and stunted, contrary to any and all reassurances that I am a nice person, doing the right things, and being responsible.  Many of these reassurances come from my parents but fall on deaf ears because the reassurances have an unpleasant ring of ingenuity to them.  If my parents really meant what they said and if they really felt proud, then it stands to reason that I would not have to fight for every single scrap of recognition and praise.  Instead, glowing admiration and heartfelt compliments would be showered upon me and rain down.  That is not the case; I beg and plead for acknowledgement and more often than not, I am sorely disappointed.

I abhor the fact that I constantly look outside of myself for approval and that I am so dependent on others for acceptance.

I had no intention of whining.  I promise that this impromptu pity party began with nobler intentions.  I wanted to write about my cousin Cory and how he is an inspiration.  I was going to captivate and enthrall my audience with humorous anecdotes from my trip to Salem, Massachusetts.  I was planning on most definitely announcing that my debut novel, Her Beautiful Monster, is available for purchase from the Martin Sisters Publishing website (http://www.martinsisterspublishing.com).  I had hoped to post an entry that was a close reading of a particularly spooky passage from Stephen King (or maybe just a love letter to Stephen King) in honor of Halloween, which is one of my favorite holidays.  On Halloween, I should have been watching horror movies and gorging myself on popcorn and candy, but Hurricane Sandy ruined Halloween, devastated the Jersey Shore, and has depressed many of the residents of the Garden State. 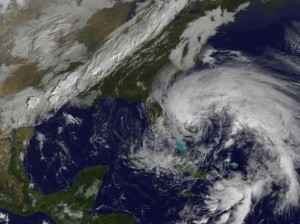 I know that I am blessed and I am incredibly thankful that out greatest inconvenience was being without power for less than twenty-four hours.  My family members, those in Toms River, are worse off, but still have homes and their lives.  I am fully aware of how lucky we are and thank God that we are okay, and being able-bodied and possessing the means, that we can help others.  I know that I talk about getting out of Jersey.  I smile when comedians make fun of the way New Jersey smells – I even commiserate – and I smile when they make fun of the incapability of New Jersey’s citizens to pump gas.  I cringe when I think of the awful, putrid reality television shows filmed in New Jersey.  But New Jersey is my home and I am damn proud of that fact.  My heroes hail from Jersey.  I am damn proud of all those from Jersey, people who bond together through thick and thin, and are always mindful of the brotherhood of man and what that means in times like these.  Sure, I talk – and write – about getting out but Jersey is one hell of a place to come home to and I want that opportunity for me, my children, and my grandchildren.  Homes may be lost, towns may be destroyed, and businesses may be demolished, but all of that can be rebuilt.  Sandy may have knocked Jersey down, but it certainly has not and will not know Jersey out.  As a fellow Jersey native once said, “And that is why our fellow Americans in the other 49 states know when the announcer says, ‘And now in this corner, from New Jersey …’ they better keep their hands up and their heads down, because when that bell rings, we’re coming out swinging.”

On November 1st, I planned to start anew and come out swinging.

I was supposed to start anew on November 1st, but there was an unforeseen complication: my dog, Bijou, was put down that day.  He was fourteen years old and the veterinarian suspected he was dying of kidney failure but without running some tests, he could not say for sure.  However, he could say with one hundred percent certainty that Bijou was dying and he more than subtly hinted that it was time to put him down.  I was okay, not sobbing, until the assistant placed a muzzle on him.  I understand it was a necessary precaution and there were legality issues to be considered, but the idea of Bijou biting anyone is laughable.  To see him so sick and obviously suffering and then muzzled like some dangerous monster was too much.  I started crying and then I could not stop.  He yelped when the painkiller was injected and I held him tighter when they brought us into the other room.  Dad and I sat with Bijou for some thirty minutes, petting him and saying goodbye and telling him he was a good boy and he was.  He did pee on Mom and he did poop in the middle of the kitchen table, but he was wicked smart and damn adorable.  I am really going to miss him. 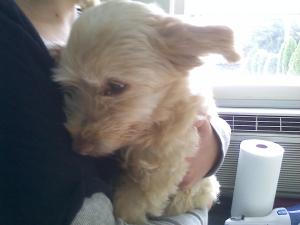 Dad whistled and Bijou tried to get up.  He tried to get up a couple of times and I wanted to just take him home.  I am really kind of pissed off that I was in the room when Bijou was euthanized because it was too damn sad.  It broke my silly heart to see his breath hitching and his eyes glossy and constantly slanted so that they were nearly shut.  I am furious that I saw Bijou so worn and so defeated.  It sucks, for lack of eloquence, to lose a pet.  I miss him.  I really do.

Mom cried – and she never cries.  She admits that it is weird without Bijou, but that is all it is for her – weird.  I want her to be right because I do not want to be so sad over a dog that was pain in the ass more often than not.  Every member of my family has hunted him down in the neighborhood when decided to let himself out for a walk.

But he was incredibly affectionate and very good with children.  He could do all sorts of tricks.

I miss my dog.  I will start anew on Monday, when I do not feel so emotionally gross and when school reopens.  The return to some kind of normalcy will be good for me and for the state.

Tomorrow I am meeting a friend for a late lunch to discuss marketing possibilities for the book.  All of my dreams can be realized if this book does well; it is all I want.