Hello all! Welcome to another edition of Writers’ Wednesdays!

And boy, do I have a story for you. It’s quite the story; so much so that I have decided to forego the weekly writing prompt to share this story.

School started up a week ago, so I’ve been busy. Mostly, I feel overwhelmed and exhausted just trying to keep up with all the demands, but I also know this is partly because I’m hormonal and partly because I’m recovering from the extreme lethargy of summer break. It appears that more than my muscles entered a nearly lethal state of atrophy. To escape all of that ugliness, I was really looking forward to seeing “IT,” the new adaptation of the Stephen King novel of the same name. Well, for all of those reasons and because it would be a welcome return to familiar territory.

Even only an occasional reader of this blog knows that I’m something of a Stephen King fanatic. I think he’s absolutely brilliant. I’ve read most of his work – even the writing under his pseudonym of Richard Bachman – and I’ve seen all of the adaptations; the good, the bad, and the ugly. I’ve seen him at readings at least three times and have traveled out of state to do so. Next to F. Scott Fitzgerald, he’s my favorite author. And of all his works, IT has a special place in my heart and has affected me in a very profound way. I remember finishing the monster of a novel (pun very much intended) with a stunning clarity. I remember I was on the way to one of my twin sister’s many athletic competitions at our local high school, practically dragged kicking and screaming to help watch our little brother who is ten years our junior. I was sitting in the last seat of this monstrosity of a vehicle (last pun, I promise), this huge, black van that I absolutely despised. It was roomy, it was comfortable, it was a logical purchase, but it had a television. That’s not a bad thing, unless you were like me: a fifteen-year-old girl who considered herself rather literary and therefore superior. In a silent, pointless protest, I would bring books in the van to avoid the television, which often blared to entertain the other passengers.

I was the worst fifteen-year-old.

On a particularly dreary day, on my way back to the high school against my will, I was in the van and I was reading. I was going to finish IT, and I did so sobbing. The story is so beautiful, and I wept with a palpable, pulsating kind of ache because I wanted so desperately to be an integral part of a team on an important mission. I wanted so badly to have a shared purpose who loved me so much they would die for me, people who weren’t family so loving me would be a choice, more of a conscious decision. I wanted a Losers Club. I wanted to make and keep a promise to be a hero. I wanted to be an adult who was still a child. In short, I wanted everything that was in the novel. I needed it to be real.

Until September 8th of this year, the best I could was re-watch a badly outdated miniseries (that I still cherish, just to be clear).

I was so excited for the new adaptation, I made plans with a friend to purchase tickets early for a fancy theater with reclining leather seats, massive screens, and speakers that boomed so loud you can feel their vibrations inside your chest. I was going to travel to a movie theater in Howell that I’d never been to, that had only opened a few years ago. I posted about the adaptation and my plans on social media for months. I can’t remember the last time I was so excited for a movie (if I had to guess, it’d be the last “Harry Potter” movie).

And the film did not disappoint. At the time of this post, I’ve already seen it twice. If you haven’t seen the movie, do yourself a favor and make plans to go and see the movie. Whether or not you’ve read the massive novel, the story is brilliantly told with great care. That being said, the movie is also incredibly disturbing. It effortlessly gets underneath your skin and catches you at random moments throughout the day. It stays with you, changes you.

When I left the theater, my stomach hurt from the anxiety. My muscles were sore from cramping and my mind was reeling. All I wanted to do was talk about what I had seen, purge the myriad of my emotions onto my companions, relive the film’s best moments. But once we left the theater, we were told we could not enter the lobby and could not even go past the podium where tickets were ripped for admission. We saw a line of employees, a kind of human barricade. It was unsettling and unnerving, even more so because we stumbled , blinking into the lights of reality from a nightmare of a film. We weren’t told why we couldn’t leave, but rumor among the large number of people leaving theaters and filling the hallway was that something was going on in the parking. We nervously shifted for about ten minutes before deciding to go the bathroom. The females in my group pressed through the tense crowd, doing our best to politely make a path, and happened to pass a female police officer. She was busily making her way through the crowd and was being asked for information at every turn. We heard her say that we were safe inside the building, and that if we wanted to be extra safe, we would move further down the hallway and away from the glass windows.

I swallowed hard. I could tell the other women in my group were nervous and upset, so I did my best to stay calm and lighthearted. All the same, we moved down the hallway.

We were inside the theater for about forty minutes. People were making themselves comfortable, plugging phone chargers into available outfits, sitting on the floor and leaning against the wall. People were preparing for a long haul, and why shouldn’t they? There was lack of information and our phones were dying one by one. Finally, an intimidatingly muscular police office got the crowd’s attention and said we could leave as long as we stayed behind him, proceeded in an orderly fashion, and kept our voice down.

My stomach flipped over.

We did as instructed, my friends and I holding onto each other as we followed the officer. He led us to the far end of the hallway and through a rear exit out the side of the building. We left the doors, trampled over gravel along a chain link fence and ended up in an adjacent parking lot. We were not allowed to go to our cars; the parking lot was being searched and the police had established a perimeter. We waited for another twenty minutes in the chilly night air, rehashing everything that had happened so far and asking for any news. I called my father just before my phone died and asked him to pick us up; we weren’t sure when we’d be allowed back in the cars.

My dad arrived just as the police began to let people return to their cars and leave. I still went home with my dad, still seeking some familiar comfort and not wanting to be alone (I never really want to be alone). Saying goodbye to my friends, I smiled and agreed that we’d have a hell of a story to share.

The employee who ripped our tickets, who guided us to the theater, who I bantered with for a few brief moments, was arrested because he had an inert hand grenade, two handguns – one of which was loaded – and hollow-point ammunition in his car. A fellow employee told the manager something was wrong, and the manager called the police. One of the theaters had an off-duty cop just trying to relax and catch a flick.

Thank God for the police, and thank God no one was hurt.

Leave it to Stephen King to scar me in unpredictable ways. 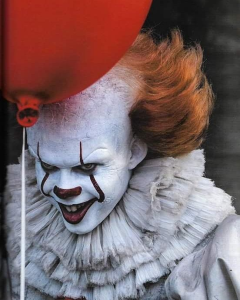